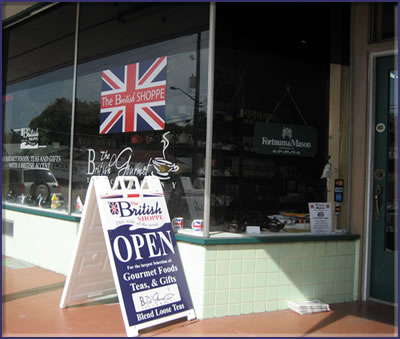 We are The British Shoppe, and Rather Jolly® Tea company. British teas have become increasingly popular in the United States over the last decade. Thats why we created The British Shoppe in 1981 to meet the ever-increasing demand for quality British teas, delectable goodies such as Devon Clotted Cream and Scones or traditional must haves like the practical tea cozy, not forgetting English bacon and Scottish meat pies and of course the amazing range of cadbury chocolates.

Perk up to face the day or just enjoy the smooth, rich flavors of a superb blend of tea. Today’s tea drinkers are looking for more than just the British basics. The British Shoppe meets this need by offering everything you’ve come to expect from a good quality tea and british goods shop, with the addition of more natural, healthier tea blends and foods from England. If you’re looking for organic, yet delightfully pleasant, English teas and treats, look no further.

Our market isn't just for the British community, the Americans who have either visited the UK or Anglophiles who enjoy all things British and all share one thing in common; their need of a reliable source for their favorite British foods and teas." In 1995, The British Shoppe expanded on their successful venture when they made their first internet presence. Allowing their customers the ease of purchasing their favorite British teas and goodies online made a tremendous impact on the continued success of The British Shoppe, which now also offers healthier, more organic choices as well as the traditional favorites of PG Tips, Taylor's, Tetley, Twinning or the delicate smoky flavor of the Hu Kwa Tea.

We are now located in Orlando, Florida. The demand, from around the world, for The British Shoppe’s fine gourmet teas and naturally made foods and tea accessories are now available to all with our mail order/internet sales and shop business.

Discriminating tea connoisseurs will not be disappointed with the selection of fine English teas and the more exotic, healthier foods available through The British Shoppe.

At our family run British Shoppe, customer service and satisfaction will always remain the #1 priority.